It's Spring Break at last! I actually have time to to write and not have to worry about getting up at 4: This is a sort of "prequel", if you will, to "Desperate Times Call For Desperate Measures", and centers around a particular event that is briefly mentioned in that story.

I actually had this in mind for something like one of the Foster's "shorts", to see how Frankie would react if Wilt ordered a girlie magazine in the mail, and acted like it was no big deal. Whether or not anyone wants to believe that there is, or could be, anything more to their relationship than "just friends", you have to admit that would be interesting to see!

As Frankie was straightening herself up from replacing that last hinge, the front doorbell to Foster's Home For Imaginary Friend rang. Glancing at just one of the countless clocks that her grandmother collected, Frankie realized that it was right at 12 noon, the time that the mail carrier usually arrived, so unless she missed her guess, that doorbell signaled the arrival of that day's mail.

For Frankie, the delivery of the daily mail was a mixed blessing; she always enjoyed doling out the letters, magazines, and care packages to the Imaginary Friends, but the mail also, inevitably, meant the delivery of more bills, and nowadays, it seemed, the latter far outnumbered anything else that the mailman could bring.

Opening the door, she could see that this day's delivery was about average in terms of quantity. Smiling, she accepted the double handful of envelopes and packages from the mailman, grateful that there were no certified letters for her to sign, that might indicate that some dept or another had not been paid, or that someone was suing the home or that something was in some way, not right.

Like most adults, Frankie had come to dread certified letters, which rarely if ever meant anything good. Turning around, she saw that several of the home's Imaginary residents were clustered around her, eagerly waiting to see if today's mail had brought anything for them. 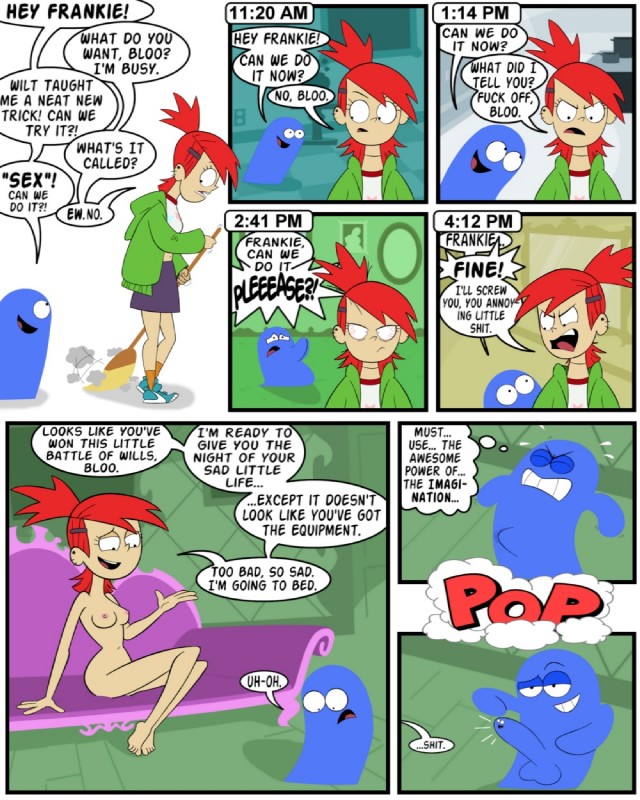 I gotta get to the DOOR…" Frankie instantly recognized the high-pitched, half-whine, half-demand as belonging to none other than Blooregard Q. Kazoo, the same one who'd caused her to have to spend half the morning replacing the hinges on the coat closet door. Shouldering his way through the crowd of other Imaginary Friends, many of whom were many times his size, the two-foot tall blue blob barged up to Frankie, reaching for the mail she still held in her hands.

You're gonna have to wait your turn just like everyone else, that is, IF there's any mail for you in the first place! Now, go back and wait with the others, and if I see something that's got your name on it, hopefully something that's not a court summons or another bill from one of those DVD-of-the-Month clubs, I'll let you know! Bloo refused to budge.

Crossing his stubby arms obstinately in front of him, he shook his head and began speaking in that patronizing tone of voice he used when he was trying to take advantage of someone; "Frankie, Frankie, Frankie,"…. Bloo looked aghast at her, his mouth dropping open like a trap door. She kept in contact with him and sent him letters at least once a month. Frankie smiled as she handed Ed the letter; it made her feel good that some creators still liked to keep in contact with their Imaginary Friends, even if they no longer could keep them at home.

Frankie immediately thought, Grandma, knowing that her grandmother was quite fond of sewing, but a second look at the addressee shot down that assessment. A large, muscular green Imaginary Friend, with one huge eye in the center of his face, rather shyly stepped forward, quickly grasping the envelope and clutching it to his massive, t-shirt-covered barrel chest, as though to hide what was on the front.

Exasperated, Frankie held it out of his reach. Now if you wanna pay some of these bills, you can go right ahead!

What Frankie saw inside the brown paper cover nearly made her eyes pop. Her jaw dropped open, and the hand that still held the multitude of bills automatically flew up to cover her mouth.

Seeing her reaction, Bloo became that much more determined to get his hands on the magazine.

Is it THAT good? Nearly bowled over by the force of Frankie's outburst, Bloo composed himself and brushed himself off, angrily.

Once Bloo was out of sight, Frankie opened it again, to make sure she'd just seen what she thought she'd just seen. Yep, that WAS what she'd seen, alright.

The title of the magazine read, Sports Illustrated: Annual Swimsuit Collector's Edition. Frankie had heard of it, of course, who hadn't? She'd just never actually SEEN it, and had never really had any interest in doing so. Looking at the cover, it was easy to understand why the publisher would ship it in a plain brown cover.

To have called whatever the model on the cover was wearing a "swimsuit" would have been a REAL stretch of the imagination! In fact, it would have been pushing it to have even gotten by with calling it a THONG, and THAT was the ONLY thing she was wearing, aside from her outspread hands, of course, strategically covering certain upper portions of her anatomy. Her mouth still open, Frankie turned a few pages, staring in absolute disbelief at the "come and get it" poses and beyond-skimpy whisps of fabric that someone euphamistically had labeled "swimwear".

I'll just take this, and be on my way, if that's OK. Frankie stared at him as if in shock, her jaw hanging open, not unlike that poor closet door had been just a little while ago, before she'd replaced the missing hinges. Somehow, she managed to find her voice. Wilt looked genuinely puzzled. He glanced briefly at the magazine in question, then at Frankie, who stared at him as if he'd suddenly grown a second head or something, then back at the magazine, before answering. Home for imaginary friends porn arched an eyebrow rather disdainfully at him, and crossed her arms.

Then he added, apparently sensing that this answer was not quite sufficient, "I'm sorry, is something wrong"? That last question catapulted Frankie into a whole new level of incredulity.

Frankie could feel her blood beginning to reach a boiling point. Wilt opened his mouth as if to reply, then apparently decided to plead the Fifth, as it were, avoiding Frankie's glare.

She decided to take a different approach, managing to keep her cool, seeing that the previous attempt didn't work. Don't you feel bad about that? If there was one thing that Frankie REALLY hated, it was when Wilt used that slow-talking, patronizing tone that suggested that whoever he was talking to was a complete idiot, in his opinion.

She knew perfectly well that many Imaginary Friends were capable of the same "prurient instincts" that their human counterparts were. Wilt looked this way and that, obviously trying to avoid looking Frankie in the eye, as he tried to come up with an answer.

It was obvious, despite his efforts to conceal it, that the conversation was making him uncomfortable at this point, and that he, too, was struggling to maintain his "cool". Then, as if calling upon some inner strength, he took a deep breath, and stared her right in the face, leaning in closer so she would not miss one word he had to say, "That's right, I AM an Imaginary Friend, but here's a news flash-I'm also — a - GUY!

Wilt felt a rare sensation-anger-rising to the surface like magma in the throat of a volcano. It wasn't something he often dealt with, his temper, and to the best of his recollection, he'd NEVER lost it with Frankie, but for some reason, her being upset with him over a simple magazine that could be purchased on any magazine rack in any supermarket, and her implied accusations that he didn't care about women being exploited and used by men just struck a nerve.

However, he also hated, for some unaccountable reason, to admit that his point-of-view was actually wrong this time. He decided that the best course of action, in this case, was simply to walk away from the "discussion"; Frankie was clearly angry about it, and giving her time to cool down, and himself time to think, seemed preferable to letting this continue on its present track.

For several seconds, Frankie just stood and stared after him, stunned, a profound feeling of " WHAT just happened?

For as long as she'd known Wilt, which was for most of her life, she could not recall him EVER having snapped at her like that, or having argued with her about anything. It just wasn't like him to do that.

It's Spring Break at last! I actually have time to to write and not have to worry about getting up at 4: This is a of "prequel", if you desire, to "Desperate Times Call In requital for Desperate Measures", and centers throughout a particular event that is briefly mentioned in that fortunes. I actually had this in mind for something like solitary of the Foster's "shorts", to see how Frankie would proceed if Wilt ordered a girlie magazine in the mail, and acted like it was no big deal.

Whether or not anyone wants to believe that there is, or could be, anything more to their relationship than "just friends", you bring into the world to admit that would be interesting to see! OK, the disclaimer thingie: If I DID own them, the show possibly would not be finishing up its run at the settle of this season, but unfortunately, I don't, and it is.

One day one of them eccentric, curious, vain and self-centered imaginary friend by the name of Blue wanted to taste the female body. His purpose, he chose twenty-two year old nice, caring and responsible young girl named Frankie. When she once again came to the house of imaginary friends, Blu aggressively pressing on self-pity was able to persuade her to have sex with him and severely fuck her two holes.